The Do’s and Don’ts: 13 Slot Tips you Must Know

It’s a given among people who run both live casinos and online casinos: People love to play slot machines.

Odds on slot machines are unchanging. There’s nothing you can do legally that will change the outcome, though scam artists sometimes have succeeded until caught, arrested and imprisoned.

But there are approaches that will help you get the most out of the games. 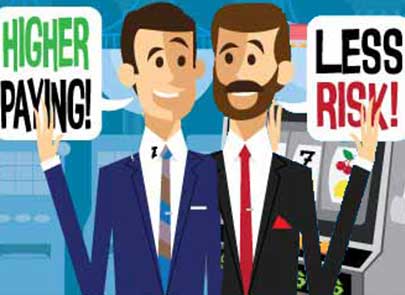 It was true when three-reel games ruled slot floors, and it’s true now when the large majority of games are video slots: Dollar slots yield a higher payback percentage than quarter slots, which may more than nickel slots, which pay more than penny games.That doesn’t mean everyone should rush out and play dollar slots.

There are factors beyond payback percentage, including entertainment value and what you want from a game.

Even in pure dollars and cents, playing higher-denomination games means bigger bets and more risk. If you’re betting $3 on a three-coin dollar slot that pays 95 percent, your average losses will be more money than if you’re betting 40 cents on a 40-line 1-cent game that pays 86 percent.

TIP #2: WITH PROGRESSIVE SLOTS, MAKE SURE YOU BET ENOUGH TO BE ELIGIBLE FOR THE JACKPOTS 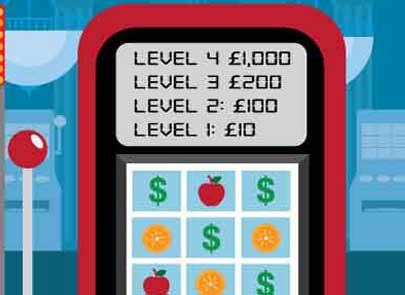 On progressive slot machines, a percentage of each wager is added to the jackpot or jackpots.

Three-reel slot machines usually have a single progressive jackpot on the top payoff, and you must bet maximum coins to be eligible.

On a three-coin dollar slot machines, for example, you can’t win the progressive if you bet only one or two coins. Instead, landing the top jackpot combination on the pay line brings a reduced payoff at a fixed amount.

On video slots, progressive jackpots usually are multi-tiered. Anywhere from two to 12 progressive levels have been offered.

Typical is a four-tier progressive with levels labeled mini, minor, major and grand, or bronze, silver, gold and platinum, or something similar.

On some video slots, all players are eligible for the jackpots regardless of bet size. On others, you must make a separate bet to be jackpot eligible.

The jackpots are the main events on progressives, and aside from those jackpots, the games usually pay less than other games.

If you are going to play a progressive, make the bet necessary to be jackpot-eligible. If you don’t want to bet that much, play a different game.

TIP #3: CHOOSE GAMES THAT FIT YOUR GOALS AND PLAYING PERSONALITY

Games that give you maximum jackpot opportunities, games that extend play with frequent small wins or something in between both of those options.

Lines can be a little blurred as game designers experiment in all formats but there are a few general guidelines.

Three-reel games put more emphasis on their top jackpots but have a lower hit frequency with more losing spins. They give you the best chance to win big or lose fast.

Video slots that have pick’em bonuses, you touch the screen to pick gift boxes, restaurant dishes, alien creatures or other game icons to reveal your bonuses.

Video slots that feature pick’em bonuses usually have high hit frequencies with many small wins that give you extended play, but a lesser chance at a big jackpot.

Video slots that feature free spins as their main bonus events usually fall between the three-reel games and the pick’em games in both volatility and the chance at a big win.

During free spins you make no additional bets and can win anything up to the top jackpot. However, it’s also possible to win nothing on the free spins.

It’s up to you to decide where to find the most value – in jackpot chances, in the player-participation opportunity of pick’em bonuses, or in the hit-and-miss nature of free spins.

TIP #4: ALWAYS PLAY WITHIN YOUR BUDGET AND BE WILLING TO LOWER YOUR BET OR STOP PLAYING IF YOU HIT A LIMIT

Most sessions on slot machines will result in losing money, and there’s nothing you can do to chance that.

Sometimes you’ll win at slots, and even win big. Enjoy those times when they come.

But never bet money you can’t afford to lose, and be sure you’re playing games that fit your bankroll.

As a basic rule of thumb, your gambling bankroll should cover 250 bets to give you a 90 percent chance of lasting three hours.

Here’s a breakdown of recommended bankrolls for that 90-percent chance of three hours without spending it all in some common configurations: 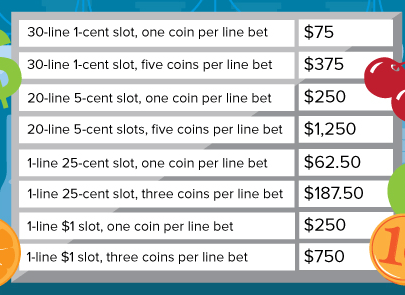 If you walk into a live casino or log onto an online casino with $200, you can’t afford to play dollar slots. Should you decide you want to try them anyway and find you lose a quick $100, be prepared to either walk away or drop to penny slots with the rest of the money.

Slot machines don’t give player the opportunity to make multiple bets in combinations like craps or roulette, or to take advantage of ever-shifting odds as card counters do in blackjack. Nevertheless, slot machines players have tried systems play for generations.

Ultimately, however, slot machine odds are unchanging, the same on every spin. The most creative systems might be fun to try, but they can’t make you a consistent winner.

Prime the pump bettors assume the wins won’t come right away. They start with small bets and work up and hope to be betting big when the wins come.

Actually, you’re as likely to win early as later on, and starting small will miss some winners. The payback percentage will be the same as if you’d bet the same amount on every spin.

TIP #6: PLAY MACHINES AT THE ENDS OF ROWS

The theory is that machines at the ends of rows are visible to passers-by and casinos want those other customers to see slot players winning. 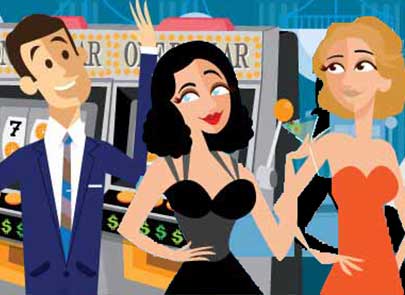 That’s of much less importance today with payoffs by bar-coded ticket rather than by coins dropping in a tray. The obvious signs of winning are gone.

In modern casinos, games of the same type in a row usually have the same payback percentage.

TIP #7: SCOUT MACHINES OF THOSE THAT ARE PAYING BIG

The opposite applies, too. Some players figure cold machines are duds. Others think they’re due to get hot.

In reality, all streaks are just blips on the radar to machines that yield a normal payback percentage over hundreds of thousands of plays.

Machines are never “due” to go hot or cold, and recent paybacks do not offer any clue as to how a machine will perform for you.

TIP #8: LOOK FOR NEAR MISSES

Scouting near misses means looking for games with jackpot symbols on the reels or screen, but just short of a winning combination.

If you’re in the right frame of mind, the scouting can add a little intrigue to choosing a game, but near misses aren’t really any indication of what’s to come.

Near misses give no indication of future outcomes.

So it goes with slot systems. They can add a little interest to the games, but they can’t change your outcomes or lead you to a winning machine.

In any business where a lot of cash changes hands, there will be people willing to go outside the law to game the system.

Slots in live casinos, where cheats can work on the physical device, have been more vulnerable to scams than slots in online casinos.

The law in jurisdictions with licensed casinos takes a very dim view of cheating the slots. Cheating licensed casinos is a felony and can carry stiff prison terms.
Nevertheless, here are a few scams players have tried.

When all slots were three-reel games with coin slots, cheaters worked a scam in which they tied affixed a string to a coin. 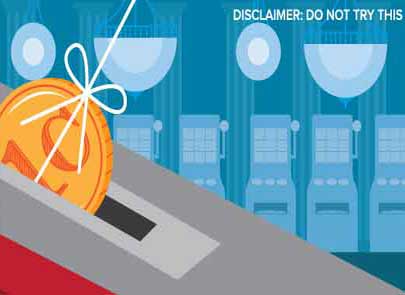 They’d drop the coin into the slot, trip the mechanism that gave them credit to play, then use the string to pull the coin back out.

One woman in Nevada was caught using a coin on a brightly colored piece of yarn, easy to spot from a distance. Others were less obvious, but those who were caught were prosecuted.

Fake coins, or slugs, were a problem for casinos as long as slot machines accepted coins.

Some were no more than a rounded piece of metal, with no design. Others were more elaborate, and counterfeiters in the eastern U.S. stamped slot tokens that looked much like those used in New Jersey.

As long the metal and manufacturing costs were a lot less than the value of a real slot coin, there was incentive for cheaters.

Some slot machines in the 1960s and ‘70s were vulnerable to ordinary magnets.

Cheaters could use the magnets to make the reels float freely instead of stopping on a spin. The scam artists would remove the magnet only when the reels had aligned in a winning combination.

More sophisticated were top-bottom devices, used into the 1980s. The top was a metal rod that was bent on one end, and the bottom a strand of wire.

The wire would be inserted in the coin slot to hit a metal contact, and then the top would be jammed in the coin slot. The combination completed a circuit that would activate a coin dispenser and send free coins pouring into the slot tray.

Protection had to be built into the games to shield vital parts from magnets and to make it impossible to hit contacts and create an electrical circuit.

This scam was pulled on so-called “Big Bertha” slots in the 1990s. Big Bertha’s are bigger and wider than other slots. 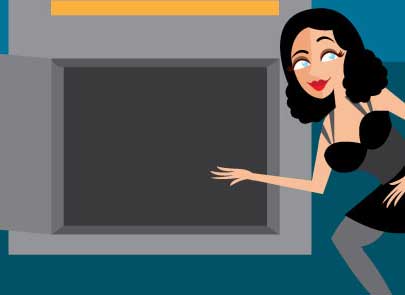 A team was arrested in Nevada after they crowded around a Big Bertha. The front of the machine was opened, a woman climbed inside and the machine was mostly shut. She then rigged results.

With team members blocking view, everything looked normal to casual passers-by, but security was alert enough to halt the cheats.

A software engineer for the Nevada Gaming Commission programmed chips that functioned normally in slot machines, except those in the know could take advantage of a cheat code.

When the cheats inserted specific numbers of coins in a specific order, the machine would pay out.

The engineer was arrested, of course.

How do you find a Loose Slot Machine? 5 Tips & Tricks!

The Basics: How to play Slots for Beginners!

Ten tricks to Jazz up your Slot Game!